From the 17th to the 24th of September, 26 students from the 8th classes flew to London with BORG’s English teachers, Ashley J.M. Townsend and Katharina Hilbrand. The pupils stayed with various host families and attended the LTC English school in Ealing to be taught by native speakers, and had a diverse free time programme as well. While improving their English, students also learned to be more independent and work on their timekeeping and orientation.
The flight was from Salzburg on Saturday and the welcome was a pleasant one, greeted by the host families and taken back to their homes. Later on, the group met for a trip around the town, Ealing, to  get an idea of where the sights and Tube stops were.

On Sunday the group went to Brighton for the day, to be at the seaside in the sun, and enjoy some delicious cupcakes.One student had actually spent 3 weeks there this summer so she was our guide down the funky streets and through the lively town centre.
On Monday, there was a bus tour around London andthe group ended up going along the Thames on a boat- and it didn’t even rain! Everyone was going „overboard“, taking Big Ben and London Eye selfies.

Tuesday was our „(money)free“ day- the students met the teachers after school, in Spitalfields Market (for another cupcake!) then one student lead us all the way to Camden Town on the Underground- where everyone was over the moon with the eclectic mix of shops, street market stalls and..yes, you’ve guessed it…amazing food from all over the world.
On Wednesday the group split into two- half went to the London Dungeons and the other half to the Warner Brothers Harry Potter tour. A great time was had by all- Dungeoners and Potterheads- even though it was quite a long, tiring day for all.
The students had a free afternoon on Thursday and met the teachers later for a Jack the Ripper tour. Walking through the twisting (and sometimes smelly) streets of London with our fantastic guide, Mick, the group could imagine they were in 1888 and it was definitely an experience we will never forget.
After the final school day on Friday, the group met at the British Natural History Museum, where they were met in the front hall by a huge diplodocus skeleton. Some went straight to the memory games, others to the evolution halls and a number to the stuffed animals. Everyone enjoyed the exhibits and a few went a bit mad in the museum shop, buying strange dinosaur-themed items. Some people never grow old.
Saturday was the last day, on which people could also grab last-minute presents for family members and friends, before the bus took us all to Stansted. Despite a flight delay, the group was in high spirits all the way home, which we reached in the wee hours of Sunday morning.

The teachers, Townsend and Hilbrand, would like to thank the group for being so laidback and easy-going, and so interested in all that was offered. We are proud to have had you with us, roaming London’s sights alongside us, enjoying countless cupcakes. 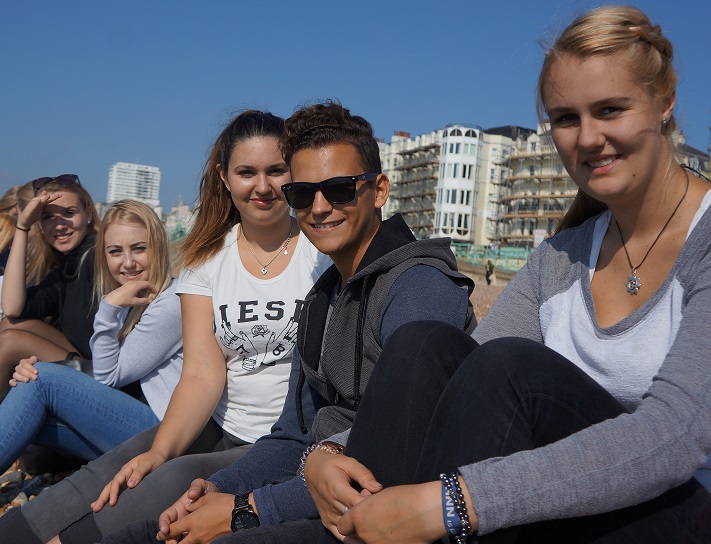